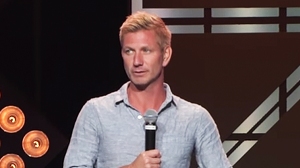 On Sunday morning, Wilson announced his decision to the congregation. In a video of the announcement posted to Cross Point’s website, Wilson shares, “We’ve said that this is a church where it’s okay to not be okay, and I’m not okay. I’m tired. And I’m broken and I just need some rest.”

The main reasons he shared for leaving were being tired, “leading on empty” and neglecting some things that should have been prioritized. Wilson was diligent to assure the congregation that he is for the church and wishes them to continue in the vision of “loving the unloved.”

One of the lessons about avoiding–or recovering from–burnout is to appreciate and appropriate the Rest of the Gospel.

Friends who went camping described their enjoyable get-away. When I asked if they slept in a tent or trailer, they told me that they used hammocks. They tied the fabric between trees, suspended above the ground–a comfortable way to relax and get a good night’s sleep.

What a picture of rest. We need times of rest for our bodies, but we also long for a rest for our souls. Like the Galatian Christians, many have “begun in the Spirit” (have been saved by grace), but are trying to be “made perfect by the flesh” (Gal. 3:1-3). The result is that we serve God with self-effort and end up exhausted.

Martha lapsed into this common syndrome, however well-intentioned. You recall that Jesus and his disciples were staying with His friends, Martha, Mary, and Lazarus:

“Martha was distracted with much serving, and she approached Him and said, ‘Lord, do You not care that my sister has left me to serve alone? Therefore tell her to help me.’ And Jesus answered and said to her, ‘Martha, Martha, you are worried and troubled about many things. But one thing is needed, and Mary has chosen that good part, which will not be taken away from her'” (Luke 10:40-42).

Stop...Trying to make it happen and get it done. “Be still before the Lord and wait patiently for him.” Ps. 37:7.
Stop...Focusing on yourself, your issues, your needs, your problems, your sin and “Let us fix our eyes on Jesus, the author and perfecter of our faith”. Heb. 12:2
Stop...Trying to do right and not do wrong and not sin and “Count yourselves dead to sin but alive to God in Christ Jesus”. Rom. 6:11
Stop...Being anxious about your circumstance and your situation and “Cast all your anxiety on him because he cares for you”. 1 Pet. 5:7

Ellerslie Mission Society Films has produced an excellent short film on the Gospel. It also includes the truth of our union with Christ. The Great Commission is to be fulfilled by Christ living in and through us!

Labor Day in the United States has traditionally been a day to cease from one’s labors and rest. God offers a lifetime of rest to all who will cease from their fleshly labors and enter His rest. Easier said than done! It is very difficult for most of us to give up on all our “so called good works.” I know it was for me. My thinking went something like this. “I’m trying as hard as I can, doing all that I can, the best that I can. It may not be the greatest (admittedly I was defeated), but I’m giving it all I’ve got. If all my hard work has only gotten me this far, just think what would happen if I gave up. Why, it would be a disaster, and I would become passive.

Since then I’ve discovered this kind of thinking to be all too common among Christians. Ceasing from our fleshly efforts in order to enter God’s rest is actually shifting from a works-oriented approach, to a grace-oriented approach to living. Ironically, many people have mistakenly thought that an emphasis on grace will lead to a life of passivity. The concern is that a strong emphasis on grace—which declares that the responsibility for our lives belongs to Christ and that He will take care of everything for us—will cause many to become passive. Nothing could be farther from the truth.

When you truly realize your union with Christ, you are not about to sit back and do nothing. Passivity is the last thing on your mind. Once you have discovered what it means to be a new creation in Christ, you are finally ready to do something of eternal consequence. As you begin to realize your true identity in Christ, it actually liberates you to an even greater level of activity—Divine activity. You are fully equipped for godly living. At last, you’re free to do what God has put in your heart to do.

Paul, the chief proponent of this truth, was no slouch. In fact, he was one of the most active Christians on biblical record. Here is what he wrote, “By the grace of God I am what I am . . . I labored more abundantly than they all: yet not I, but the grace of God” (1 Corinthians 15:10).

Did you notice he said he labored much more than everyone else? He is not bragging—far from it. It is merely a statement of fact. Yet, in a sense, it is bragging, though not about himself. Who did Paul credit for such fervent activity? He emphatically stated that it was God who made him who he was, and enabled him to do what he did. He described this remarkable phenomenon as the grace of God. Paul declared that his labors were a result of God and God alone. He was bragging all right—on God!

The grace of God does not result in passivity. Paul made it very clear that this life of grace, as a new creation, is anything but passive. He told the Colossians, “I also labor, striving according to his working, which works in me mightily” (Colossians 1:29). Paul declared that such a lifestyle is a labor, which involves striving, and results in work being accomplished.

What was the source of Paul’s labor? The energizing source of his dynamic labor was none other than the indwelling Christ! He also asserted that everything he did was a result of God’s work in his life. It was Christ who did the work, but He has chosen to do it in and through human personalities. That’s you and me. We have been granted the marvelous privilege of being co-laborers with Christ. We are the human instruments through whom He has chosen to accomplish His Divine purposes. Divine activity is to be the order of the day for those believers who are living by the grace of God as new creations in Christ.

On one hand, you don’t do anything; yet, on the other, you do everything. You, in your human strength, are not to do anything. However, you, in the strength of the Lord, are now able to do all things! In Philippians 4:13, Paul wrote, “I can do all things through Christ who strengthens me.” This is now your motto.

A young Christian told me this was her favorite verse. When I asked her why, she answered, “It gives me hope and confidence. I am hopeful that things will be different for me as a Christian. I also have a new self-confidence, because God has made me a new person in Christ. Therefore, I am confident of what I can do through Christ, who is now my strength.” May God grant you this same outlook on life!

Once, a friend met a young man who said he had been a Christian for a few years. After determining that the young man had truly met the Lord, he began to quiz him about his Christian walk. As they became better acquainted, several interesting things emerged.

It became evident that the young man’s life was stagnant. In fact, he seemed to just be going in circles. To make matters worse, he blamed others for his dilemma.

When my friend realized the young man was stuck in a rut he exclaimed, “Man you’re sitting on a gold mine, and you’re just letting it go to waste. As a Christian, God has endowed you with a brand new life. Are you telling me that you have Christ inside of you, and yet you are not allowing Him to live His life through you? That’s just not right. It’s time for you to get with the program!”

The same is true for you. If you feel as though your life is going nowhere, then it’s time to get with the program. The transforming truth of the new creation made it possible for the apostle Paul to do God’s work. Likewise, you must be about your Father’s business!

May this Labor Day be the beginning of a lifetime of resting in the Lord. As you do, you will find His grace sufficient for all your labors. And you can rest assured that your labor will never be in vain in the Lord!

Taken from Introducing The New You, to read more – http://www.sourceministries.net/go/resources/the-new-you/